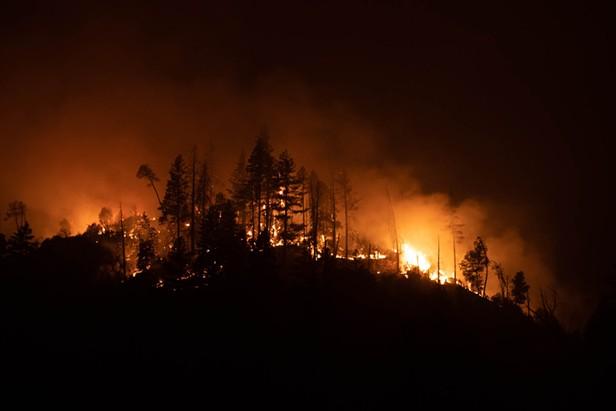 The United States Forest Service has announced that the Monument Fire is human-caused, but 11 News has not received a confirmation from them. As of 7:30 p.m., the fire was still active and there were no “smoke delayed” burn periods. Work has continued on the west side of the fire, and there is a high likelihood of wetting rains. This article may not be updated, depending on circumstances.

Continued work on the west side of the monument fire

The Monument Fire is still smoldering in the northern portion, but recent rain and increased suppression efforts have reduced the threat. Firefighters took advantage of minimal fire behavior to remove unneeded equipment, cool hot spots and repair suppression. Crews also continued to work west of the fire footprint, removing hazard trees along Soldier Creek Road. However, fire behavior will be slow moving throughout the rest of the week.

The Monument Fire continues to grow, advancing by nearly 6,000 acres in just one night. This fire has displaced thousands of people in the area, and remains a threat to communities such as Big Bar, Del Loma, Burnt Ranch and the Trinity River. Work on the fire continues to advance, but incoming storms may slow progress. In the meantime, crews are preparing for additional firefighting efforts.

On the western side of the fire, crews will continue patrolling and mopping up as necessary. Crews will recover equipment from Bar 717 ranch, and mop up the area around Butter Creek Meadows. Additionally, crews will continue to mop up secondary firelines in the 31N66 road system east of Indian Valley and south of Pattison Peak. They will also continue chipping operations along 32N11 and Hyampom roads. Additionally, crews will assess Bear Creek 12W22 road for damage caused by fire suppression.

The Monument Fire continues to spread across the western side of the Hayfork Valley. It’s estimated to burn 150,011 acres with a 20 percent containment rate. Highway 299 remains closed to all vehicles except residents. Firefighters continue to build contingency lines and protect the west end of Hayfork. With clearer skies on Monday, helicopters were able to drop more water and food onto the fire, helping firefighters reach critical areas. More evacuation orders and warnings were lifted on Monday as fire activity began to move away from the populated area.

On the west side of the Monument Fire, firefighters continued to monitor and repair containment lines, removing smoldering stumps and debris. They also worked to repair handlines near Hobo Gulch. They are also continuing to remove hazard trees. The fire has become a major safety concern due to the prevailing winds. With continued efforts, the fire will remain under control through the weekend.

Crews continued to patrol the Trinity River and mop up hazard trees. They repaired handlines and bulldozer lines. They also continued to hold Denny Road and the New River Trailhead. They also completed the removal of structure defense equipment in the area. While crews continue to hold along the fire’s perimeter, they will focus on clearing fallen trees and repairing structures damaged during the suppression process. And they will continue to monitor secondary containment lines.

Wetting rains are expected to fall today and tomorrow, after the Monument Fire is nearly ninety percent contained. Fire crews are working to secure containment lines and to keep the fire east of Denny Road. Regardless of the rain, the fire’s containment lines should be completed by early next week. There are many questions still unanswered, but the latest information will help the public stay informed.

As firefighters continue to protect structures, firefighters will shift resources to the southwest perimeter of the Monument Fire. The highest priority will be securing the containment line along Hyampom Road. Firefighters will also engage in firing operations along this road to reduce fuel in front of the advancing fire. This will result in intermittent road closures. Wetting rains are expected to fall throughout the night. However, the Monument Fire will remain on the outskirts of the community of Hyampom.

The Monument Fire continues to smolder in the northern part, but firefighters are taking advantage of minimal fire behavior and are doing suppression repair and removal of unneeded equipment. Firefighters are also working to remove hazard trees along the highway and work west in the interior of the fire’s footprint. In the meantime, firefighters are hoping for a wetting rain to help them make progress. If not, there are many more firefighting tasks ahead.

Today’s fire behavior was active near Hoboken and on the southwest side near Hayfork. A steady rain began falling in some areas after midnight, which moderated fire behavior. One tenth to two-tenths of an inch of rain fell on the area. Crews continued to protect structures in the vicinity of Hoboken and worked on two small spot fires near New River and Butter Creek Road.

Smoke will continue to rise through the morning, but ridgetop winds will moderate the fire’s behavior. By late afternoon, the smoke will clear and sunshine will return to the area. After three in the afternoon, ridgetop winds will continue in the southern part of the fire. Saturday night will be cooler and wetter than expected. Some rainfall is expected in the area, but this will not affect the fire’s progress.